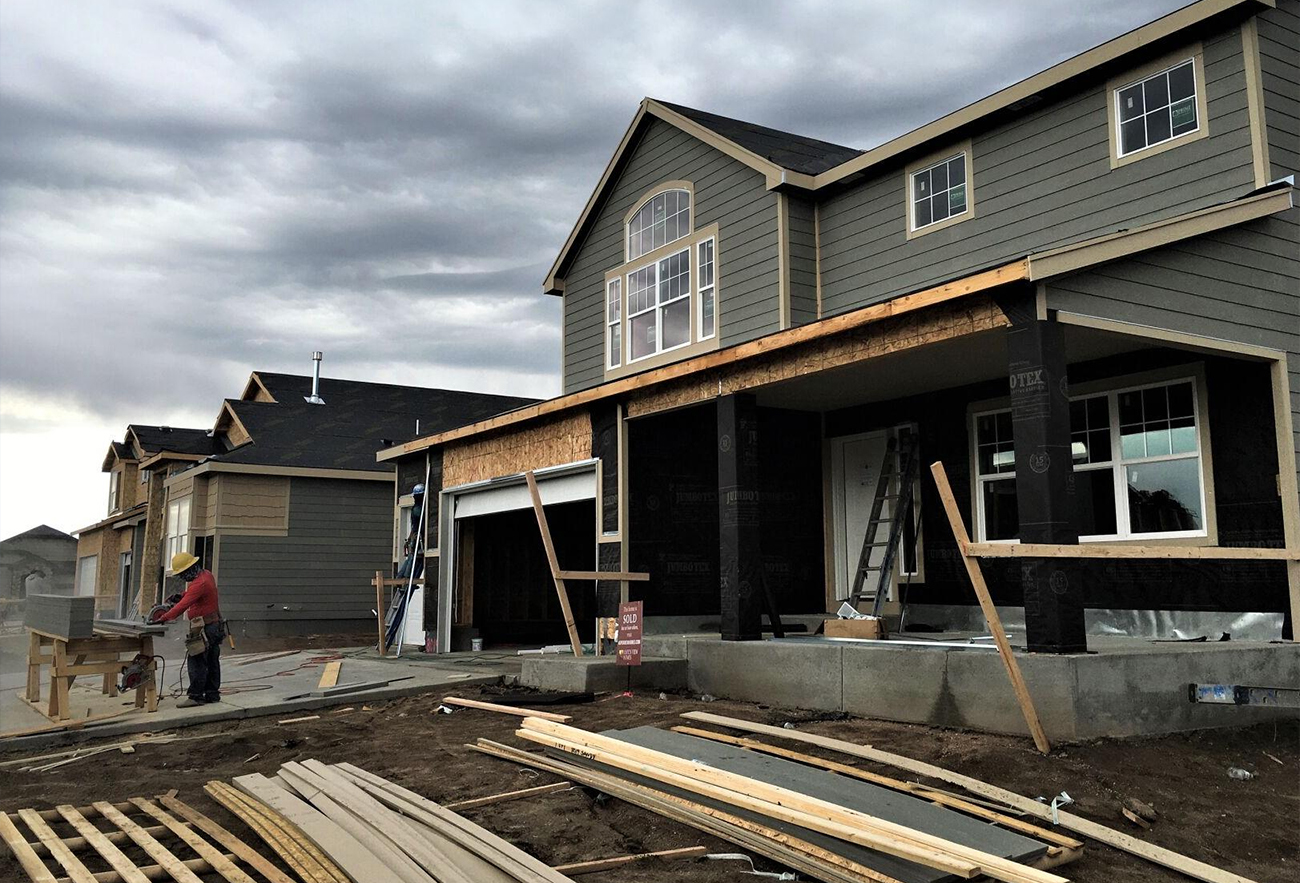 According to Pikes Peak Regional Building Department reports, the estimated value of construction permits for El Paso County issued in 2020 skyrocketed to $2.9 billion – making this a record high, and jumping over 2019 by one-third. This includes: single-family homes, townhomes, apartments, hotels, offices, schools, medical buildings, manufacturing plants, and other structures.

“We’ll have 60 to 70 subcontractors on each big project,” said Dustin Black, senior project manager with Springs general contractor Nunn Construction and past board president of the El Paso County Contractors Association. “And every single one of them are historically busy. Every one of them. Which is great.”

Though the ‘new’ construction sector saw a boom, the Regional Building Department reports show a much different result for residential and commercial remodelings, renovations, and additions. The estimated value of permits issued fell nearly 15% on a year-over-year scale, sitting at $569.1 million in 2020. Even with a near 15% decline from 2019, with a half a billion dollars in work for additions and alterations, remodelers and contractors continued to have their hands full.

“The volume of jobs, just as a guess, would be about 30% more,” Eric Sachaj, owner of Advanced Remodeling Services in Colorado Springs, said of his company in 2020. “It’s been a very busy year. Everything was ramped up to the point where we had a hard time keeping everything scheduled.”

With many industries seeing economic downturns and some unrecoverable losses, a flourishing construction industry means only great things for the local economy. Alongside a growing area, the job opportunities rise for all involved. Homebuilders, general contractors, and remodeling companies have to hire thousands to maintain the influx of work: carpenters, drywallers, electricians, plumbers and laborers, as well as engineers, estimators, project managers and superintendents. This also includes suppliers and trucking companies, as well as other business and small industries that benefit when builders and contractors are busy with work. And while the construction industry continues to flourish, the tax revenue from materials and equipment purchases, in tandem, funnels its way back into the local governments for Colorado Springs, El Paso County, and other surrounding areas. The revenue contributes heavily to fire protection, police funding, upgraded roads, park maintenance, and other local government services.

Unfortunately for others, the pandemic’s impact resulted in different outcomes. Several restaurants chose to close permanently, while others were able to close indoor dining rooms temporarily. With a drastic reduction in business and leisure travel, many hotels and large venue style hotels were unable to fill rooms, and ultimately had to forego conferences, wedding receptions, and other money-making events.

Governor Jared Polis issued stay-at-home orders beginning in March 2020 which required temporary closure of all non-essential businesses, in an effort to combat the spread of coronavirus. However, construction related companies were given the green light to continue their operations as they were deemed essential businesses, though they had safety measures in place to maintain. This was not the case in some places such as Boston and Pennsylvania as construction projects were halted in the very early days of the pandemic.

“We were so fortunate in our community that we were considered essential,” Colarelli said. “There are communities where that was not the case with construction. If you were to look at those communities, I suspect the impact on the economy of COVID was probably a lot more significant than it was here, because our construction continued and it was able to drive continued investment and make sure a lot of people were getting paychecks every week.”

Desirable place to work and live

The existing economy pre-pandemic was doing well on its own, and there was an influx of new household demands as young adults began to leave their parents’ homes, and the Colorado Springs and Pikes Peak region saw many newcomers.

“We’re getting a lot of people that are relocating here that might be living, I don’t know, in Iowa,” said Regional Building official Roger Lovell, whose agency issues building permits and inspects construction projects to ensure they adhere to building codes. “Now they can work remotely, so they say, ‘all right, let’s go live in Colorado.’ It’s relocation. You got places like California that people can’t get out of fast enough.”

As buyers were considering their options on the market, the common theme was a low inventory. As mortgage rates were at a historic low for the first time in over half a century. This in turn sent buyers to new construction, and builder’s permits started jumping. There was a 28% increase year-over-year for single-family detached homes, with almost 4,500 on the construct list. Making this the highest jump in almost 15 years. A smaller share of the residential market, townhomes, also saw a spike in construction permits, gaining 4.2% over 2019’s year end reports. Millennials and empty nesters traditionally in demand for apartments also fell by nearly 30% in 2020. While the large multifamily apartment projects increased 20% from the previous year.

“We just have a shortage of housing,” said Carrie Bartow, board president of the Housing & Building Association of Colorado Springs. “We have seen an influx of (people) coming into our state. In spite of, or because of the pandemic, people are working from home and thinking they can work from anywhere and (they’re) trying to move out of the big cities and looking for a better way of life.”

Jim Johnson, owner of GE Johnson Construction, said most of the area’s residential and commercial construction is based on demand, and not speculation.

“We don’t build a lot of (excess) inventory,” Johnson said. “That’s both residential and commercial product. I think what you’re seeing is growth, as well as some pent-up demand.”

The demand for multifamily living is increasing in newer spaces in the city, and demand for newer product among renters has also gone up significantly, Johnson also stated. The Springs’ downtown area is also seeing hotels and apartments in various stages of construction and planning, which went decades without any new housing or lodging projects.

Penrose-St. Francis Health Services, a health care giant in the InterQuest area in the far north side of the city, is beginning its construction of a hospital campus in the area. And on the northeast side the plan is to expand its St. Francis Medical Center.

Also in the InterQuest area, Ent Credit Union’s new 300,000 sq. ft. headquarters is under construction, and is designed to accommodate the rapid growth of the financial institution’s Front Range. “It’s the first time they’ve built their own corporate headquarters in 50 years,” said Johnson, whose company is the project’s general contractor.

Colarelli claimed that the low interest rates made it a good time for developers and commercial investors to borrow and build. “Activity for us is, in large part, the result of the ability of our clients to get funded and the cost of funding for them,” he said. “Particularly last year, the cost of money was extraordinarily inexpensive.”

He also states that some lenders have looked into new places and ways to invest their money and have abandoned the traditional avenues that were heavily impacted by the pandemic, like hotels and restaurants. “I have nine hotels, all of which are slowed or stopped because of the inability to get them financed,” he said. “Retail has slowed, It hasn’t stopped. But retail certainly has slowed.”

Many lenders have turned to the online retailers, who have an increased demand for warehouses and distribution centers for their products, Corarelli said. He added, this in turn creates more industrial opportunities for the construction industry. With the growth in demand for more digital technology and communication, many businesses are being triggered to construct data centers, or hubs – large technology warehouses to house computer servers and other tech equipment.

A house is no longer just a home

With the new work restrictions and the office dynamic being catapulted to an at-home setting, homeowners are becoming more aware of the space they keep, and what that means for their homes. Based on some conversations with homeowners and industry colleagues, Sachaj, of Advanced Remodeling Services, has said many who are now working from home or remained homebound as a result of the pandemic, now see the opportunities for upgrades they would like to make to their properties. This uptick has kept remodeling and renovation companies busy, he stated.

“Instead of just being home to spend a few hours and sleep, they’re home all the time or most of the day and they tend to notice more things and recognize certain changes in their house that would be beneficial to their family,” he said. “And they call us to make the changes.”

Sachaj’s company does a variety of remodeling and renovation projects, including: additions, basement finishes and bathroom and kitchen remodeling. “We’ve definitely had some additions,” Sachaj said of projects his company did during 2020. “A lot of people are finishing basements, as well. Finishing a basement is the cheapest way to add square footage to your home. If you move, you’re going to spend more for that square footage.”

The U.S. News & World Report and other national publications, rated Colorado Springs one of the country’s most desirable places to live. Projects such as the U.S. Olympic & Paralympic Museum have caught the eyes of businesses, developers, and investors looking to expand markets, Colarelli said.

Amazon, the ever growing online giant, plans to open a large distribution center this year as well, located near the Colorado Springs Airport. In late March, North Dakota based Scheels All Sports will open its Walmart Supercenter-sized outdoor equipment and apparel store. And California based In-N-Out Burger chose Colorado Springs as its first Colorado location, including a distribution and production facility.